When I get to Vinterviken, where Yemisi Wilson has her studio, the sun is at its zenith and the noise of the city seems remote. A creative murmur has replaced it, and Yemisi is standing outside wearing a protective mask, holding her grinder at the ready. Once inside, we have coffee and talk about a coming exhibition. And about stone. Yemisi’s knowledge of the subject is profound, and she eagerly shares it with others. The studio teems with figures in everything from yellow marble from Sienna to sandstone and gray granite. Their scale runs from miniatures to the monumental. Yemisi’s sculptures are figurative; the works tend to manifest naturalistic precision – something that’s extra clear in her animal portraits. Here there’s an evident connection to the classical Italian heritage in sculpture, which she is also trained in. She finds it difficult to work with conceptual ideas and avoids sullying her art with theoretical frameworks. In her work with human portraits in porphyry, she abandoned the outright figurative in favor of a dialog with abstraction. The properties of porphyry are very different from those of, say, marble, where the softness invites you to create layers of playfulness in the lines, in the spaces between the convex and the concave. Porphyry is brittle yet very hard—the hardest stone Yemisi has ever worked with. It soon became evident that she couldn’t use her chisel to work sculpturally; instead, she had to rely on coarser tools and thereby find new entry points into the material. Familiar approaches had to give way to what the tools permitted. And that’s precisely where Yemisi’s strength lies: She allows her fascination and curiosity to trump frustration and fear of the unexplored.

However, it would be an underestimation, and partly misguiding, to depict Yemisi’s work as driven merely by curiosity. Yemisi seems to be impelled by a primal force that she herself is not always able to control. Her primary guide is her intuition, and she follows it with tools and instruments without a map or a destination. She’s devoted to her instinct and has learned, throughout her solid classical training and her many years of sculpting, to remain humble toward the material she has before her—its heritage, its history, its capabilities, and its limitations. She keeps coming back to the notion that there’s an ongoing conversation between her and the material, where both are doing their best to release what seems to want to get out—what yearns to, has to, tell us something.

There’s a thread connecting how Yemisi approaches each new assignment: she often dwells in the sphere of memory. She moves between an unconscious collective memory, the history of the place, and her own connotations of events, occurrences, and places. And, perhaps most of all, of stone as a bearer of memories. The work with porphyry started out as the “Great Uproar” that took place in Älvdalen 300 years before Yemisi’s own birth and sparked the organized witch trials there. The point of entry became an exploitation of stone as a memorial material and the creation of a posthumous tribute to the women who were burned at the stake. In the summer of 2018, in Älvdalen’s open quarries, Yemisi found black rännås porphyry, a stone that in its blackness has streaks of red, bringing to mind glowing embers. The connection was reinforced by the fact that forest fires were then raging uncontrollably in large swaths of Sweden, and there was a pungent smell of smoke. But the porphyry sculptures changed as the work progressed; the material had a will of its own, and the women who emerged now seem to come from different places in the world—all with different origins, and with their voices filled with unheard stories. The connection to the origin of the material now feels even closer: porphyry is rock from magma formed at a time when the earth’s equator went through Älvdalen.

The portraits of women have been given asteroid names taken from mythology, and as your eye washes over the polished surface, a piece of the universe opens up. The mirror finish reflects your own image, and, in the same moment, a part of your life heritage is released. Our history is infused in the material and, if we listen carefully, we can almost hear how these ignimbrite pillars of cinders continue to crackle and burn. There lies a serene universality in knowing we are all one, part of something greater. This is what she gets back to as I leave her in her studio at Vinterviken—making space for what had never been told. 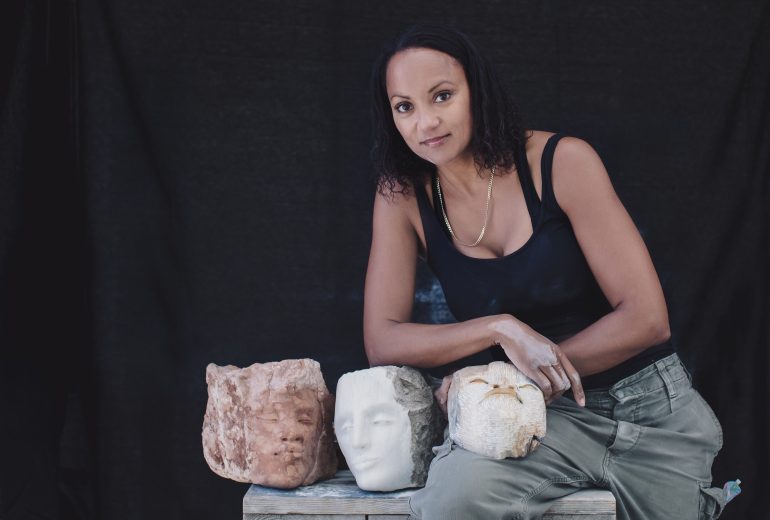